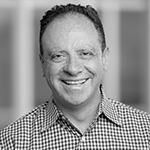 Iyad joined Federated Wireless as CEO in August 2014, at that point an early stage startup with significant intellectual property in spectrum management. Iyad is leading the commercialization of the technology, tapping the emerging $1B+ market in shared spectrum.